Responses gathered in March 2021 by the Culture Restart Audience & Visitor Tracker from the Insights Alliance (Indigo Ltd, Baker Richards and One Further) show that:

Increase in future bookings and willingness to book within 3 months

With 74% of survey respondents in March having now received at least the first dose of a Covid-19 vaccine, there has been a significant growth in those consideringreturning to cultural venues, particularly compared to responses in January.

The proportion of respondents in March who have booked an event or planned a visit to a cultural organisation in the future is 48%, fairly consistent with the 47% of respondents who responded this way in February, and a modest relative increase of 9% compared to January.

However, there has been a significant change in when those who haven’t yet booked say they will start booking again. 37% of March respondents say they will be ready to start booking again within 3 months, compared to 24% in February and 15% in January. Among younger respondents this figure is even higher, with 52% of Under 35s willing to book within 3 months, compared to 33% of those aged 65-74 and 30% of Over 75s.

Overall, the proportion of those who say they are not willing to book for more than 6 months – or they are not sure when – has decreased from 52% in January to 45% February and 34% in March. 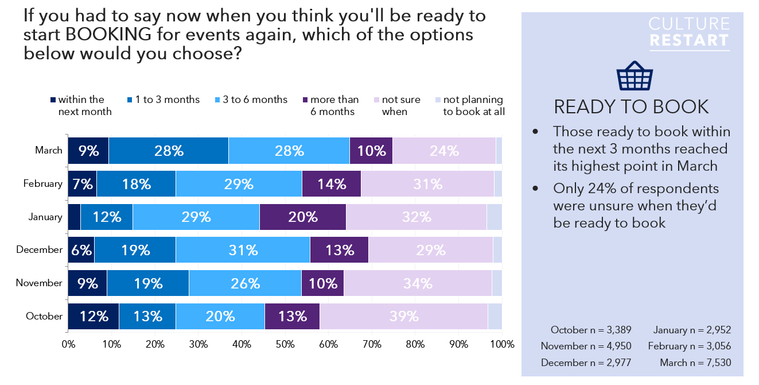 Confidence about returning to cultural venues continues to grow

When asked which of a selection of statements best fits how respondents are feeling about returning to cultural venues, 57% of respondents in March said they would consider returning as soon as venues reopen if they were satisfied with the safety and hygiene measures in place. This is compared to 40% of respondents January.

Whilst those aged under 35 are most confident, with 70% willing to return if satisfied with the measures in place, there has been a huge increase in confidence of those aged over 65 over the last 3 months. In January only 29% said they would consider returning with safety measures in place – this has increased to 54% in March.

19% of respondents in March say they can’t envisage attending until the vaccination or rapid testing programme was more established and 12% say they would prefer to wait to attend again ‘in the usual way’. 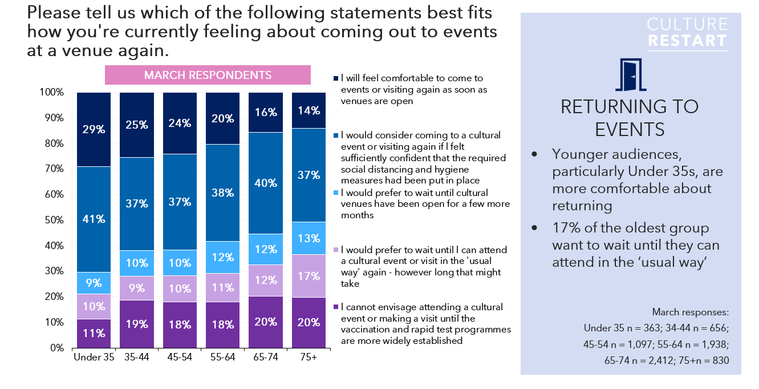 Responses in March show a growth in trust in cultural venues and the measures they would have in place to keep audiences safe when they reopen.

When asked how confident respondents felt that cultural venues would have appropriate measures in place for keeping audiences safe and informed, as well as staff and performers, the responses in March showed a higher confidence score in each category compared to January and February.

Returning with restrictions in place

There was a continued drop in proportion of respondents saying that particular measures or restrictions were essential to their return, although the majority still expect to see them.

While the majority of audiences responded ‘I’m OK with this’ to a requirement for face masks to be worn throughout the venue, in January 44% of respondents said this would be essential to their return – this decreased to 34% in February and continued to drop to 29% in March. Similarly, socially distanced seating being essential to return has dropped from 51% in January to 39%, although 56% of respondents still said ‘I’m OK with this’.

60% of respondents are still uncomfortable with the idea of no restrictions being in place subject to Covid testing on arrival, though the proportion who said this has dropped from 72% in January.

When asked how they felt about ‘a vaccine passport being required to attend live events’, 67% of respondents selected ‘I’m OK with this’, with 13% saying it would be essential for them. Younger audiences are less comfortable with this idea, with 37% of Under 35s saying they felt uncomfortable compared to 14% of Over 65s. 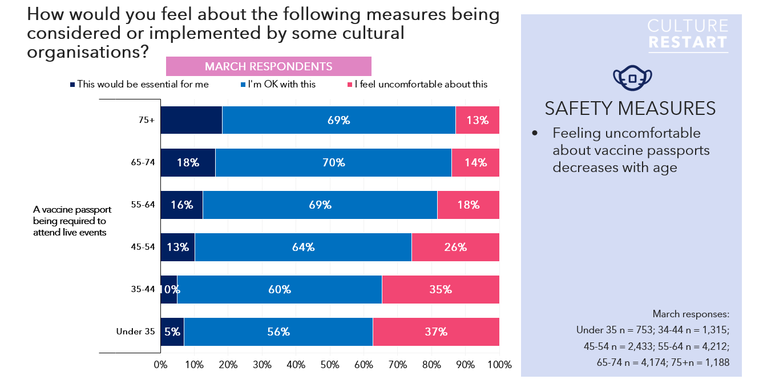 The future for digital

57% of respondents have engaged with culture online since March 2020, and of those who have, 51% have done so four or more times. Continued interest in culture online remains strong and fairly consistent, with those who say they are ‘Interested’ or ‘Very interested’ in engaging in future dropping slightly to 37% compared to its highest level of 42% in January. 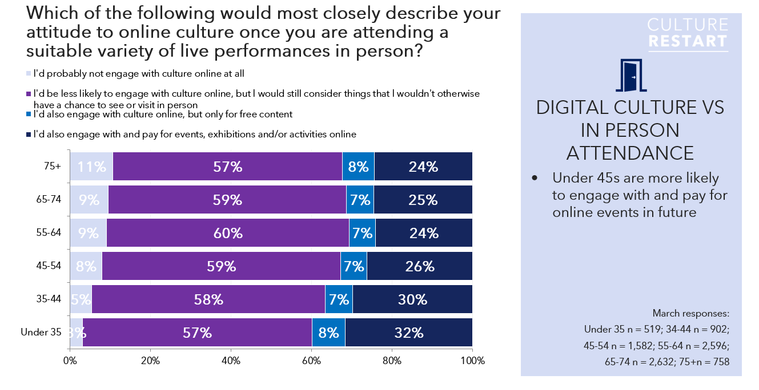 The Culture Restart Audience & Visitor Tracker is the successor to Indigo Ltd’s After the Interval sentiment tracker. Developed by the Insights Alliance – Indigo Ltd, Baker Richards and One Further – the Tracker has been following sentiments and confidence of cultural audiences since October 2020. Reports have been released regularly, with Baker Richards providing analysis of the data and results shared in an interactive dashboard created by One Further.

This update reports on fieldwork from cultural organisations including theatres, arts centres and touring companies across the UK during since October 2020, and does not cover the West End. 75% of respondents usually attend culture four or more times per year. There have so far been over 42,000 responses from 70 participating cultural organisations.