Responses gathered by the Culture Restart Experience Survey during the two weeks following the further relaxation of restrictions (19 July – 1 August 2021) show that: 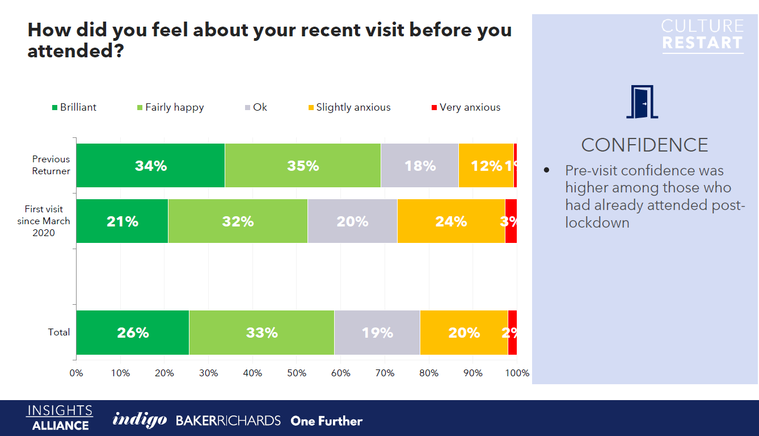 For 65% of respondents, this was their first visit back to a cultural venue since March 2020.

The results show an increase of 22% in audience confidence through attending events – from 59% saying they felt ‘Brilliant’ or ‘Fairly happy’ before the event to 81% after attending – with both socially distanced and full capacity events building confidence.

There were higher levels of pre-event anxiety among those attending for the first time with 27% saying they felt slightly or very anxious before the event, compared to 13% of those who had previously returned. However, the first visit back builds post-event confidence to 79%, almost the same level as those who had returned previously (85%). 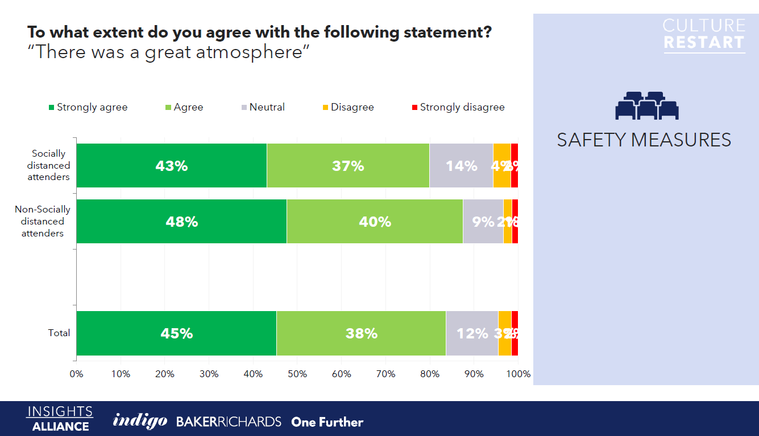 Audiences are continuing to love the return to live performance, with an average rating of 4.5 stars for the production or event they attended, consistent across socially distanced and full capacity events.

More than 4 in 5 respondents (83%) said they agree or strongly agree that there was a ‘great atmosphere’. This was even higher for full capacity performances (88%) than socially distanced events (80%).

However, the overall Net Promotor Score (a -100 to +100 rating which measures likelihood to recommend the organisation to a friend or colleague) was higher for socially distanced attenders (+66) compared to full capacity (+58).

Feeling safe at the venue and likelihood to return 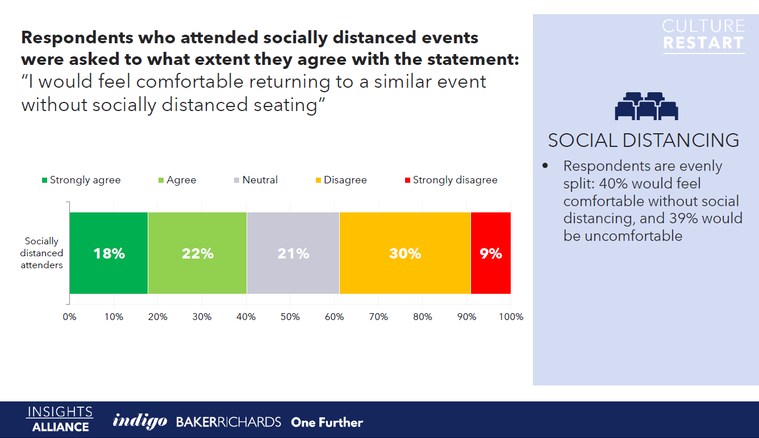 4 in 5 respondents (81%) said that they felt confident that the venue had appropriate measures in places to keep them safe.

Those who attended socially distanced events were more likely to say they were ‘able to forget about safety and simply enjoy myself’ – 84% agreed with this statement compared to 64% of full capacity attenders. However, only 12% of those who attended full capacity events said they felt slightly or very anxious after attending. 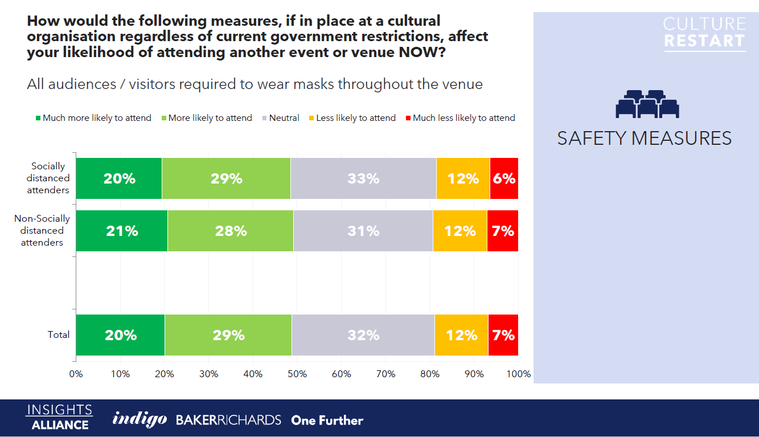 “This latest data highlights the continued threshold anxiety being experienced by previously frequent cultural attenders, with higher levels of anxiety being seen ahead of the visit, particularly for first time returners. Once audiences have a positive experience at a cultural organisation with sensible and proportionate safety measures in place, a majority want to come back again. Therefore, reassuring audiences and encouraging them back by elevating the voices of those who have already returned will be key.”

The Culture Restart Experience Survey is a post-visit survey developed by the Insights Alliance – Indigo Ltd, Baker Richards and One Further. It is designed to assess the success of safety measures in place at cultural organisations, and gather instant feedback from audiences as venues reopen.

Since October 2020, the Insights Alliance have been following sentiments and confidence of cultural audiences through the Audience & Visitor Tracker, Digital Experience Survey and Experience Survey. This update builds on results gathered by surveys from cultural organisations including theatres, arts centres and touring companies across the UK during since October 2020 and does not cover the West End. There have been over 70,000 responses to Culture Restart Toolkit survey from more than 100 participating cultural organisations.

Results from Act Green suggest audiences are engaged and concerned about the climate crisis and think cultural organisations should be as well.